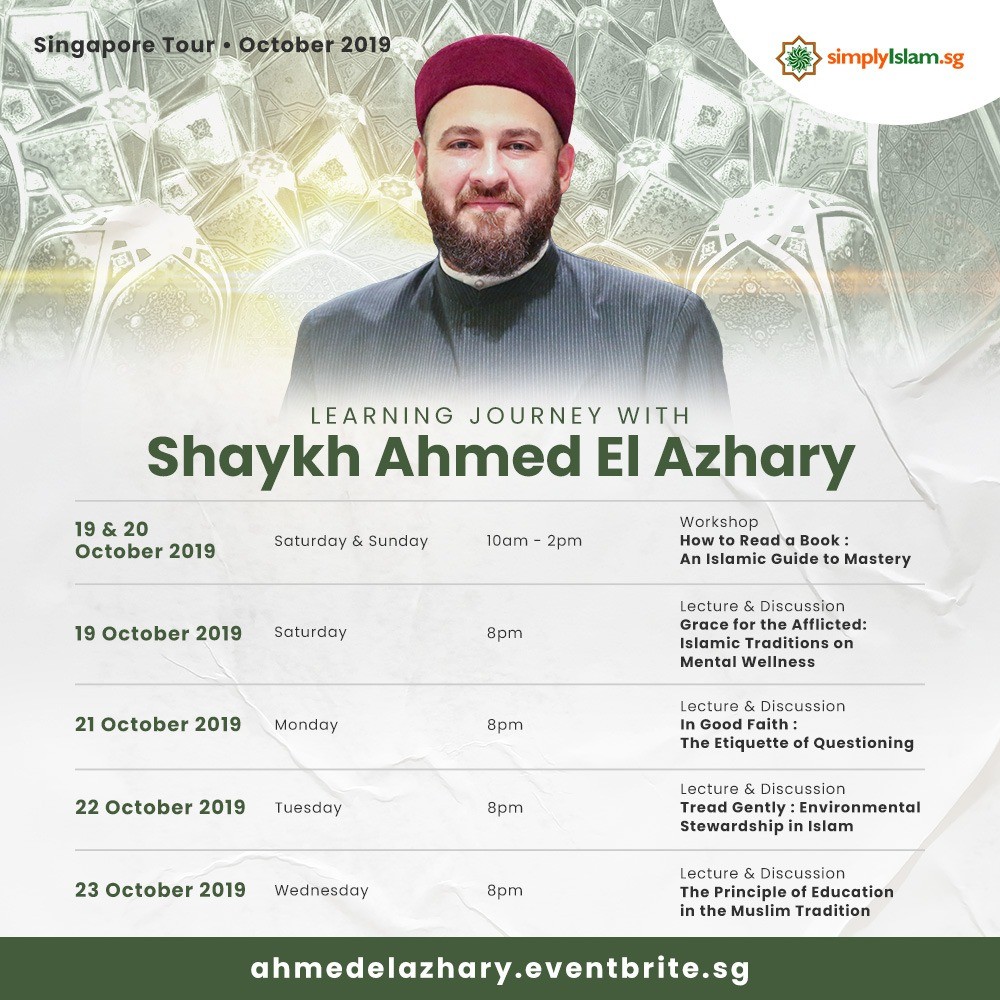 Master Teacher Shaykh Ahmed El Azhary will be in Singapore for an exclusive series of Talks and Workshops from 19 to 23 October 2019!

Shaykh Ahmed El Azhary is a Master Teacher of the Islamic Traditional Sciences, and a leading researcher in Islamic Intellectual History.

He was also a lead researcher at Tabah Foundation and was architect of the philosophical framework of Suaal initiative – an initiative concerned with modelling an Islamic philosophical response to contemporary existential questions - appointed by Habib Ali al-Jifri , and supervised and guided by Shahykh Ali Jumu'ah, Habib Umar and Shaykh Usama al-Azhary.

Shaykh Ahmed El Azhary will be bringing his breadth of knowledge of over 50 certificates in a variety of contemporary subjects including Teaching Character, Clinical Psychology of Students, model thinking, conflict analysis and over 70 Ijazas from scholars all over the Muslim world to SimplyIslam.

Don’t miss the chance to learn and expand your Islamic knowledge from one of the foremost Islamic teachers in the western hemisphere and a Master of Islamic Traditional Sciences, Philosophy, and History.

Over the course of five days, from 19 to 23 October 2019, Shaykh Ahmed El Azhary will be conducting a series of lectures and workshops on a variety of topics such as How to Read a Book: An Islamic Guide to Mastery, Grace for the Afflicted: Islamic Traditions on Mental Wellness, In Good Faith: The Etiquette of Questioning, Tread Gently: Environmental Stewardship in Islam and The Principles of Education in the Muslim Tradition.

Topic: How to Read a Book: An Islamic Guide to Mastery

Shaykh Ahmed El Azhary will discuss why the art of reading is critical for students of knowledge to master. One of the greatest barriers in mastering a science is the inability to read with structure and comprehension. In this series, the speaker will provide students with a detailed approach to rectifying this problem. In addition to offering practical tips and guidance in improving one’s reading and learning skills the speaker will elaborate on the development of the instrumental (foundational) sciences within the Islamic tradition and how they compare to medieval and modern theories of literary comprehension. The speaker shall further elaborate on how a student can build an intimate relationship with a text, and will provide a framework of surveilling a text on various levels, and the methodologies in analysing concepts and propositions laden within the text

Topic: Grace for the Afflicted: Islamic Traditions on Mental Wellness

Our emotions are the means through which many of our tests in life come. Whether it is happiness, sadness, gratitude, anger, or otherwise, we are tested through our responses to them. Being balanced emotionally is essential to our mental health, as well as longevity. Trauma can upset this balance, and in its absence issues such as addictions, depression, anxiety and in extreme cases – mental illnesses can arise.

The speaker will address how we can achieve a state of balance. He will discuss the subject through referencing the Islamic sources of the Qur'an and Sunnah, and evaluate praiseworthy works and contributions of Muslim physicians and philosophers in the field of mental health.

Topic: In Good Faith: The Etiquette of Questioning

In fact, such inquiring can actually lead to spiritual growth and maturity – moving from mere acceptance to owning one’s beliefs in a deep and meaningful way.

With the current global warming crisis, discussing the environment and ways of preserving it is no longer a luxury. In this lecture, the speaker will discuss about the deep reasons that led to the exploitation of our planet Earth. The Islamic worldview represents a unique model for a transition to sustainable development focused on harmony between human and nature, and thus the environmental challenges we face today is an indicator of a moral and ethical crisis.

Allah The Merciful says, And the servants of the Most Merciful are those who walk upon the earth easily [Qur'an 25:63].

Islam defines a good life (hayat tayyibah) as living lightly on earth and caring for both people, animals and nature. The earth will find a balance if human beings reconsider their lifestyle, as Allah reminded in the Holy Qur’an,

Corruption has flourished on land and sea as a result of people’s actions and He will make them taste the consequences of some of their own actions so that they may turn back. [Qur'an 30:31]

Do you not realize [Prophet] that everything in the heavens and earth submitted to God: the sun, the moon, the stars, the mountains, the trees, and the animals? [Qur'an 22:18]

This means that everything in the universe is in worship to God, and corrupting the planet is essentially silencing a community of worshippers. The speaker will elaborate on the subject through Qur’an and the Prophetic traditions, as well as the notable works of Muslim scholars and saints. He will illustrate the difference between caring about the environment because of mere pragmatic concerns and caring for it on the basis of an ontological understanding of the world. Religion, thus, can become a powerful solution to the colossal environmental crisis we are facing today.

Topic: The Principles of Education in the Muslim Tradition

Islam places a high premium on education and has enjoyed a long and rich intellectual tradition over the last 1400 years. There are more than 800 references to it in the Holy Qur'an, like God will raise up, by many degrees, those of you who believe and those who have been given knowledge (58:11) and Lord, increase me in knowledge! (20:114).

Various terms are used to represent the various dimensions of the educational process, like ta’lim, used to denote knowledge being sought or imparted through instruction and teaching. Another, tarbiyah, implies a state of spiritual and ethical nurturing, while another, ta’dib, suggests a personal social etiquette.

Professor Seyyed Hossein Nasr (1984) mentioned that while education does prepare humankind for happiness in this life, "its ultimate goal is the abode of permanence and all education points to the permanent world of eternity". Education in thus twofold: acquiring intellectual knowledge (through the application of reason and logic) and developing spiritual knowledge (derived from divine revelation and spiritual experience). Acquiring knowledge in Islam is not intended as an end but as a means to stimulate a more elevated moral and spiritual consciousness, leading to faith and righteous action.

The speaker will elucidate on the above points, and guide the participants towards an appreciation of the objectives of Islamic education.

Shaykh Ahmed El Azhary is a researcher in Islamic intellectual history and a teacher of Islamic traditional sciences. He’s currently a teacher of Hadith, Usūl, Logic and Kalam at Rawdatul-Na`īm under the supervision of Habib `Ali al-Jifrī; and at Madyafat Shaykh Ismaīl Sadiq al-`Adawī (RA), a prominent learning center by al-Azhar Mosque in Cairo.

His previous experiences include: participating as a teaching assistant and then as a mentor at “Learning How to Learn,” the most popular course of all time on Coursera provided by University of California – San Diego; and working as a high school teacher of business, economics and psychology courses as well as supervising character development programs at Green Heights International School.

Shaykh Ahmed studied Anthropology at American University in Cairo and received his training in Leadership Communication from Tulane University and The University of Alabama at Birmingham. He is also a life-long learner. He holds a diversified portfolio of almost 50 certificates in a variety of subjects – extending from Teaching Character and Clinical Psychology of Children and Young People to Complexity Theory, Model Thinking and Conflict Analysis.

Having read hundreds of books and conducted countless hours in research and study, Shaykh Ahmed has contributed to academic scholarship through four printed publications that help us understand the post-classical scholarly community in the Islamicate world. One of which is al-Matali` fī Adāb al-Mutali`, a compendium of seven edited treatises in the art of deep reading. He’s currently working on a second compendium that will include another three treatises in the same subject.

Beside a number of edited works about to be released in Islamic pedagogy, linguistics and Hanafi Usūl, Shaykh Ahmed has authored Rūh al-`Ilm – a treatise in the art of scientific investigation, based on a survey of roughly 200 traditional Islamic texts, and has been endorsed by Dr. Jamāl Fārūq, the Dean of Islamic Da`wah College at al-Azhar University and Dr. Ahmed Mamdūh, the Chair of Research Division at Dar al-Iftaa’ al-Masrīyah. Rūh al-`Ilm will be published by Tabah Foundation in the early of summer of 2019.