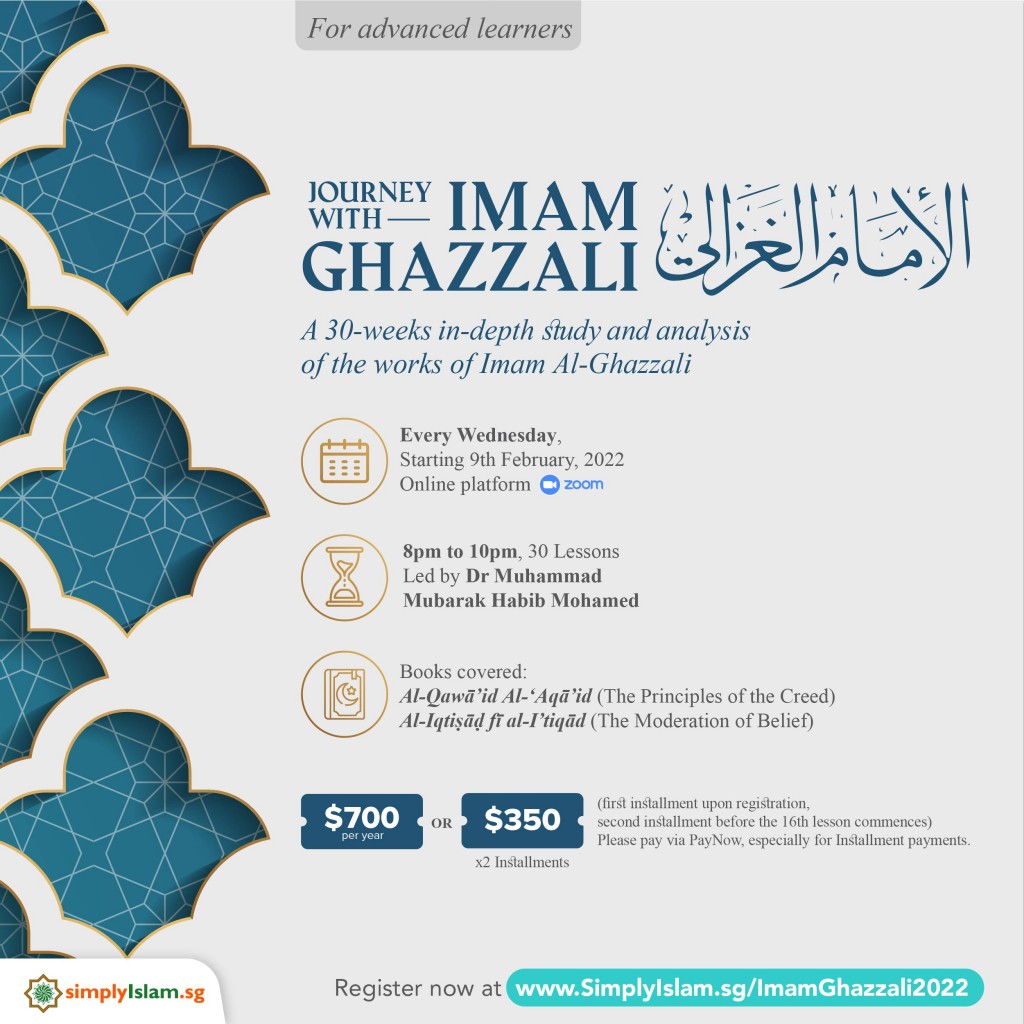 Event will be conducted in English

A 30-week in-depth study and analysis of the Theological-Philosophical thoughts and works of Imām Al-Ghazzālī.

Imam Al-Ghazzālī, like many other classical Islamic thinkers, regarded the sciences of religion (‘ulūm al-dīn) as a practical pursuit. For him, the science of religion anchored an obligation for seekers to establish a direct and personal relationship with Allāh The Almighty, with the aid of the cognitive faculties endowed in every human being.

Imam Al-Ghazzali was a deep-thinker. A highly-intelligent and gifted man whose entire thinking was driven by a deeper layer of philosophical understanding of the soul, and of the human self, where the heart sits at the epicentre of this core understanding, and forms the cornerstone and birthplace from which ethics and morality are developed and delivered.

Like many other great Sufi masters, Imam Al-Ghazzali shared the belief that the heart is the single and most important medium that holds the conduit for one to understand and connect with the Divine. Through years of ultimate devotion in seeking and deciphering knowledge, and through great spiritual affinity, Imam Al-Ghazzali painstakingly developed the science of the hereafter, from which he derived that obtaining felicity in the afterlife is the ultimate purpose of human terrestrial life. He does not deny the importance of worldly life, but instead demonstrates how this life if a bridge to the next.

The central purpose of traditional or authentic religions is to provide people answers regarding reality in a profoundly full ontological sense as well as to have the proper ethical-moral systems to guide their every thought and action in living this world with that reality. In other words, authentic and traditional religions place the focus on to know, love and worship the Creator and to serve His creations with nobility and purpose by utilizing creations that are put at the service of the human beings. Philosophically, authentic religions points of departure from post-truth era, is metaphysics, which is the first science of being, and of its first principles that give the foundation of laws, virtue and ethics from which politics emerges. In this post-truth era, the first principles that ground our knowledge of metaphysics have not fared well. This current post-truth era, which has its foundation from the Western Enlightenment modernity, represents a departure from this first principle, which is then followed by way of deconstruction. This deconstruction has changed the notion of absolute truth and the universal as biases of the medieval relics, which must be discarded to give way for ‘objective’ multiplicities and tractable truths. What is considered by traditional religions and cultures as necessary structures for coherence for the understanding of reality and truth are replaced by relative people’s experience, cultures, history and worldviews. For example, Islam’s conception of faith is the submission of the heart to absolute truth, which the individual knows with certitude through sound reasoning of the intellect. This differs fundamentally from the understanding of faith as essentially unreasonable or illogical and hence requiring a leap beyond logic as to how it is seen in these contemporary times.

Kalām, a science that deals with tenets of faith pertaining to realities divine, prophetic and eschatological, like all other great sciences in Islam needs renewal and development, especially in light of the immense strides our species has made in the physical sciences – sciences that our classical theologians were always engaged in during the great periods of Muslim intellectual flourishing. Our scholars dealt with the most knotty and enigmatic problems of physics, cosmology, and theology and many of their resolutions and reconciliations are as relevant today as they were a thousand years ago. We must know what the ancients knew before we can add to or abstract from their profuse and fertile legacy. Our challenge is a formidable one: to rediscover and renew Islamic theology, to reconcile the divorce between the modern physical sciences and the theological and ethical considerations of the religious sciences, and to restore the balance between reason and revelation. The human condition, after millennia, remains the same, and the questions that confront and challenge us are perennial ones that every generation must ultimately face if an unexamined life is to be avoided: What is this world (ontology)? Where did it come from (cosmology?) How do we know anything (epistemology)? What do we do while we are here (soteriology)? Finally, where are we going (eschatology)? The answer to these questions lies in the essence of the two testimony of faith waiting only to be discovered anew. This discovery needs to be robust and enriched as how the classical engagement were and simultaneously reaffirming the creed of all prophets and messengers send by the One God to humankind.

The objectives of this course are:

• To equip participants with the correct understanding of Islamic Metaphysics.

• To equip participants with the tools to understand classical theological-philosophical thoughts.

• To build a pool of contemporary Muslims who are equipped with tools in synthesising classical and contemporary thoughts.

Texts for the Course

The following are the texts to be read. Here are the titles and synopsis of the texts:

This book is book two of Imām Al-Ghazzālī’s magnum opus the Iḥyā ‘Ulūm al-Dīn(Revival of the Religious Sciences). This book discusses the orthodox belief of Muslims. The book consists of four chapters. In chapter one, Imām al-Ghazzālī provides a concise summary of the essence of the creed of Muslims. It spells out the components of the two testimony of faith (shahādah). Chapter two deals with the pedagogy of teaching the creed with a series of questions in which he presents arguments and counter-arguments. Chapter three, is an intermediate text which he includes in his expositions in this book. This chapter revisits the categories mentioned in chapter one but with more logical arguments. Chapter four ends with the relationship between Imān and Islām and whether the imān of a person can increase or decrease. This book provides readers of the fundamental understanding of how faith has been systematised into a logical argument, which debunks the idea of mere blind following.

This book is related to the previous book in its organisation of topics. However, new and more complex syllogistic arguments are discussed in this book for the establishment of the fundamental creed of orthodox Muslims. Imām al-Ghazzālī presents arguments to posit the creed of orthodoxy between two extremes: excess and deficiency on relying on the intellect-reason. He argues that the intellect-reason is like sight and revelation like sunlight; one needs both in order to see clearly. This book is meant for readers who are non-specialists and those who want to know the conclusive proofs of the foundation of the creed. This book provides a clear example to contemporary readers on the application of the principle of wasatiyyah to revelation and ‘aql in matters involving the creed.

This is a comprehensive programme envisioned into a 3-year curriculum. It is dissected into a yearly structure . Each year, for 30 weeks we will read two books, as detailed. Books 3 and 4, above, will be read in 2022.

These remaining books are planned to be read in 2023, in chronological order:

This book primarily deals with the danger of takfir (declaring other Muslims as disbelievers) due to differences in the understanding of the creed. This book places a legal and theological place for religious tolerance in Islam. It also clarifies the criteria for unbelief and apostasy in Islam. He presents a rule of interpretation when dealing with difficult textual evidences especially with the “anthropomorphic” descriptions of the One God found in the Qur’ān. This book admits readers to the diversity and flexibilities that exist within Islamic theology.

This book is a caution or warning for the general masses to beware of theologizing with regards to the traditions that imply the One God’s anthropomorphic attributes and with regards to the allegorical interpretation of Qur’ānic verses. This book, being the last book written by Imām al-Ghazzālī a few days before returning to His Lord, recommends the return to the basic understanding of these traditions in the teachings of the pious predecessors.

*Note: It is not a requirement for the student to attend for all three years, but for optimal lucidity on Imam Ghazzali s works, it is recommended that students attend the full three years. As such, registration has been split into an annual process and students can choose to attend, one, two or all three years. The current course fees will cover the costs of this year’s fees, conducted over 30 lessons in 2022.

Installment Payments: $350 at the point of registration, another $350 to be paid before the commencement of the 16th lesson. ($300 x 2 for existing Imam Ghazzali Students)

(*SimplyIslam reserves the right to make changes to class dates due to public holidays or any other unforeseen eventuality.)

Existing students or those paying by installments: Please make payment via PayNow or Bank Transfer

Dr Muhammad Mubarak Habib Mohamed received his PhD in Islamic Civilisation and Contemporary Issues at Sultan Omar ‘Ali Saifuddien Centre for Islamic Studies, Universiti Brunei Darussalam. He has a Master of Arts, Islamic Spiritual Culture & Contemporary Society from the International Institute of Islamic Thought and Civilisation (ISTAC), International Islamic University of Malaysia.He has previously taught and won awards at Temasek Secondary School and was also a lecturer at Jamiyah Education Centre in their Diploma in Shar’iyyah Law. He is a Religious Rehabilitation Group (RRG) Secretariat member since 2009. He has also been teaching voluntarily at Muslim Converts’ Association of Singapore since 1998.