Re-enchanting Humanity: The Future of Islam with Shaykh Ali Gomaa 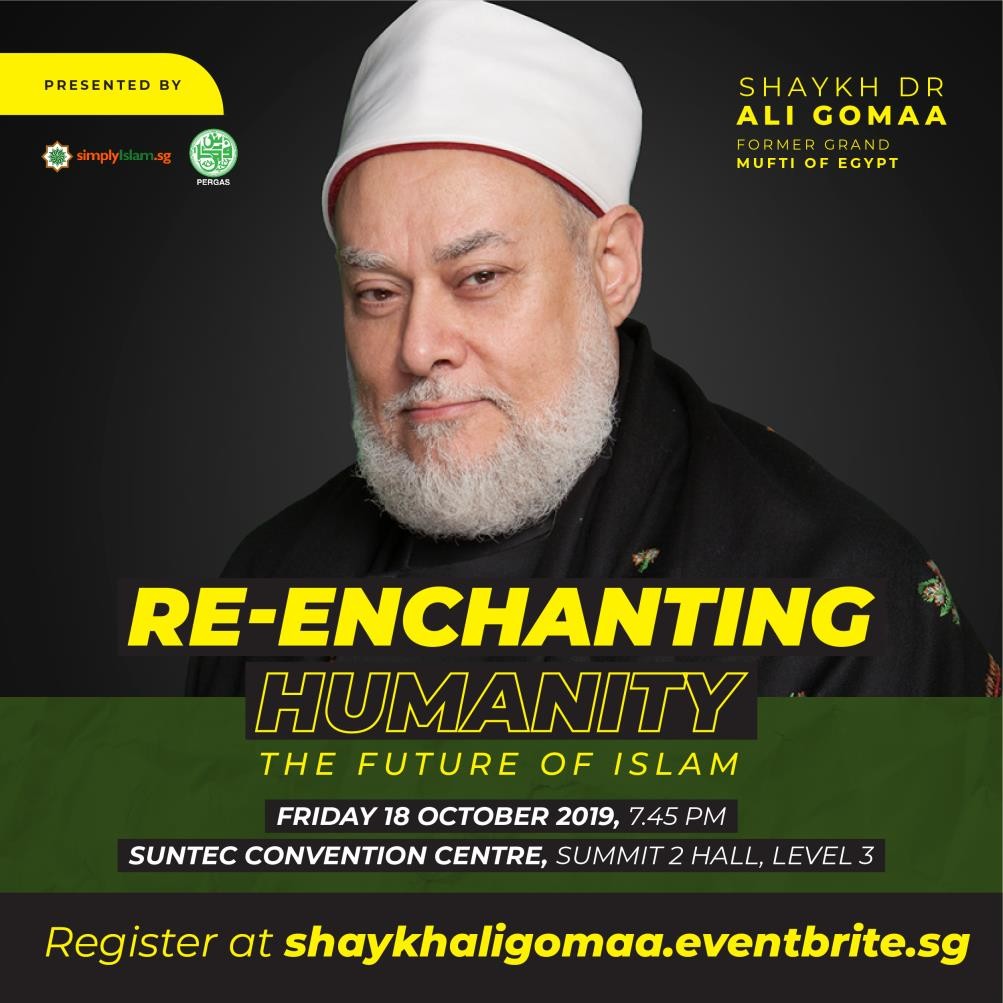 Shaykh Ali Gomaa will guide us on how we can balance the scales between Religiosity and Humanity to be beacons of the Prophetic Light.

Re-Enchanting Islam: The Future of Islam | By His Eminence Shaykh Dr Ali Gomaa

The Human race is desperately in need to witness the virtues of humanity. We often lose sight that Allah has created mankind in full honour and dignity - "Indeed We have honoured the children of Adam” (Qur'an 17:70) - by blessing us with the ability to think and express our feelings and emotions so as to be good functioning members of the society.

Many Muslims are very much focused on the performance of the externalities and the Laws and often missed the forest for the trees, forgetting important aspects of the Prophetic teachings and guidance. Allah The Merciful reminded us regarding the Prophet Muhammad, Allah's Peace and Blessings be upon him,

The Messenger of God is an excellent model for those of you who put your hope in God and the Last Day and remember Him often (Qur'an 33:21).

The Prophetic teachings amalgamates and balances between religiosity and humanity, not one for the other. Hence, upholding the best relationship with Allah Almighty and also to the rest of mankind is indeed an Islamic obligation. We often hear of people saying that we can religiosity or outward piety, but less of humanity when we are so dearly in need of it.

Muslims are often challenged to justify the values that Islam upholds on humanity, morality, social justice, and so on, and we can draw from the Prophetic traditions, the Sunnah, to respond to such challenges. The morality of the Prophet (s) includes diverse traits and aspects of living, with the constant being that of mercy and compassion.

For example, when the Prophet Muhammad (s) called out to the people of Ta’if to Islam, the people threw stones at him causing his sandals to be covered by his blood. But instead of showing anger he portrayed immense mercy when he prayed for them or their descendants to embrace the truth one day. And this is as Allah The Merciful had described of His Beloved (s):

By an act of mercy from God, you [Prophet] were gentle in your dealings with them – had you been harsh, or hard-hearted, they would have dispersed and left you – so pardon them and ask forgiveness for them (Qur'an 3:159).

The Prophet Muhammad (s) refused to consider people who have wronged the Muslims as a justification for showing aggression towards other people of the same race or religion. He did not use the treachery of a Jewish tribe as justification for showing hatred or enmity towards every Jew in Medina. Neither did he refuse to continue his dealings with them, nor did he made it lawful to seize their property just because their co-religionists had wronged the him (s).

When we lose track of our balance, and only concentrate on the externalities, we lose track of our purpose to be the best in servitude towards Allah and His Creation. The Prophet Muhammad (s) said: “The best of people are those who are most beneficial to people.” And the Prophet (s) prescribed the attainment of love and the spreading of peace as keys to paradise,

“I swear by the One in whose hand is my soul, you will not enter paradise until you believe, and you will not believe until you love one another. Shall I not inform you of that which enables you to attain this? Spread salaam (peace) among yourselves.” (Sahih Muslim, Tirmidhi, Ibn Majah, Abu Dawud).

The eminent American Christian preacher, Martin Luther King Jr said "Darkness cannot drive out darkness; only light can do that. Hate cannot drive out hate; only love can do that.". He is indeed right. When we have attained peace in our heart, then love, peace and tranquility shall emanate from it and manifest in our actions and dealings with others. We need to re-enchant the humanity with the beauty of Islam.

The speaker, His Eminence Shaykh Dr Ali Gomaa, will guide us on how we can balance the scales between Religiosity and Humanity to be ambassadors of peace, and become a beacon of the Prophetic light for all.

_This event is organised in collaboration with PERGAS Singapore.