The Life of a Great Sage Series: Imam Al-Haddad 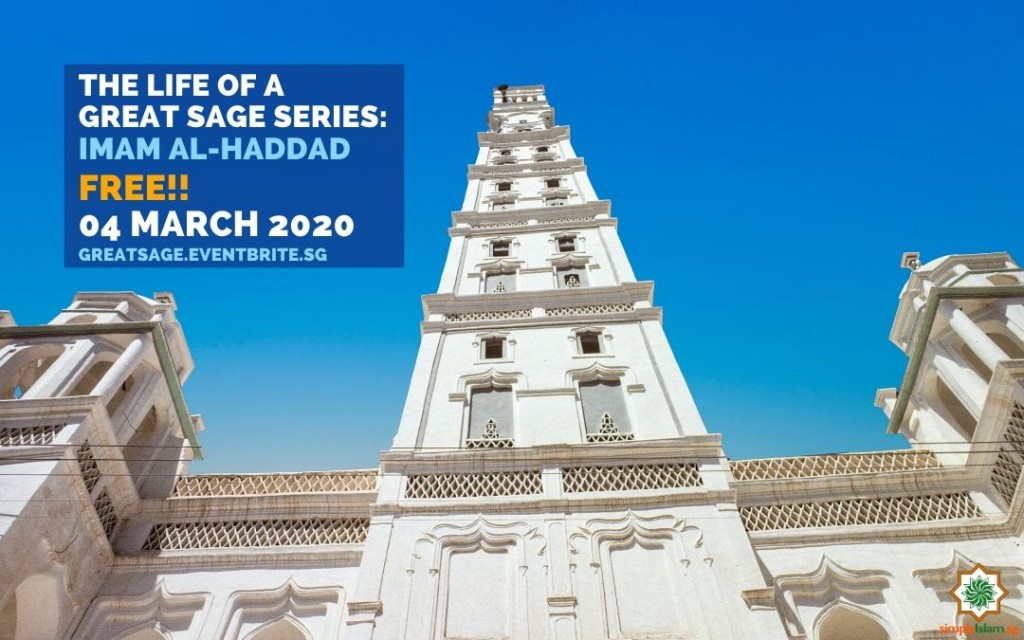 Learn the inner workings of one of the Greatest Scholars of Islam, and gain deeper insight into his timeless teachings!

The saints are models of human excellence. They demonstrate this with their lives their ways and their teachings - how to really live and how to really die.

They consistently point to the horizon of love which leads to the fulfillment of all human desire: To Know Allah and his Beloved Prophet Muhammad P.B.U.H.

It is important for us Muslims to learn how they these saintly scholars lived their lives, and try to emulate their model of innate piety, generosity, honesty and many other beautiful traits.

Allah Subhanahu wa ta’ala said: Behold! verily on the friends of God there is no fear, nor shall they grieve”.

In this course, participants will learn all about the life of Habib Abdallah Alawi Al-Haddad, his works, teachings, spiritual devotion and contribution towards Muslim Society - from then to today.

Don't miss this chance to partake, learn, absorb and emulate the beautiful teachings and character of Imam Al-Haddad.

This course is open to all, of ages 16 and above. Basic knowledge, exposure or familiarity to Islamic knowledge is not required.

1 • Introduction to the course/ Family and Background

Born in 1975 in Singapore, Ustadh Leyaket Ali studied through the primary and secondary school system in Singapore. He then pursued an in-depth study of the Islamic sciences in the Islamic traditional city called Tarim, situated in the Hadramawt valley of eastern Yemen, widely acknowledged as a premier theological, juridical, and academic center.

The city is distinguished for producing outstanding Islamic scholars, including the great Imam Abdullah al-Haddad and the famous jurist from Singapore, Sheikh Umar Al-Khatib, and many others throughout the world.

Ustaz Leyaket Ali studied in the institute called Rubat Tarim, an Islamic educational institution established in 1886 by a group of Tarim notables. Many of its graduates, more than 15,000, have travelled to propagate Islam and establish religious institutions all over the world, including Singapore.

Upon his return, he worked at Al-Mukminin Mosque as its Executive Imam. He was appointed in 2005 as an Assistant Registrar (Naib Qadi) with the Registry of Muslim Marriages (ROMM) and regularly solemnise Muslim marriages. He later pursued a Masters Degree of Social Science in Counselling by the University of South Australia, which he graduated in December 2008. He then advanced his interest in interfaith dialogue, joining An-Nahdhah Mosque, known for its Harmony Centre. He is also an active member of Religious Rehabilitation Group (RRG).

He has produced two books: “Blessings of Time – Daily Practices of a Muslim” a 150-page book of do‘a (invocations), dhikr (remembrance of Allah), solat (prayers) and acts that a seeker can fulfill in seeking the Divine Pleasure, and a translation of a compilation of invocations entitled “Bintang Kejora”, written by a renowned scholar, Alhabib Zayn Bin Sumayt.

Ustaz Leyaket completed his Ph.D. in Inter-Religious Studies at The Indonesian Consortium for Religious Studies in Yogyakarta, a program jointly offered by three universities (Gadjah Mada, Duta Wacana & UIN Sunan Kalijaga). He is knowledgeable in the sciences of Islam, and fluent in the languages of English, Malay and Arabic, and is married with three children.